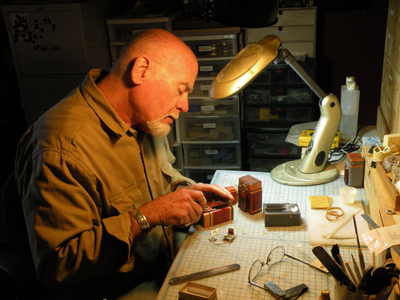 A Short History of The Shakers in America

A short history of the Shakers and the reproduction of their furniture in miniature by Dr. Ken Byers

Who Were the Shakers?

Coming to America from central Europe beginning in 1774, the early Shakers (sometimes referred to as “Shaking Quakers” due to their unusual form of physical worship) searched for freedom of worship and action. They were led here by their founder Mother Ann Lee and settled along the Hudson river on New York. During the next 100 years their communal-based sects spread across New England, New York, Kentucky, Michigan, Indiana and Ohio and they became famous for their quality of craftsmanship, inventive nature and pure and dependable seed development. Their later fame developed from the fine sense of design inherent in their community architecture and furnishings. Based on a belief that decoration was offensive to God, they developed a unique style of furniture for their own use that reflected both utilitarian perfection with visual simplicity and beauty. Today, it is considered the only true American furniture style. Work, especially done by the human hand, was considered a high form of prayer.

Life in America was not easy during these times and the Shakers offered an opportunity for people to belong to a community where cleanliness, public sanitation, purity of food and health care were highly regarded as religious principles. Many of the common health problems that confronted the frontier life of the common man did not exist in Shaker communities and all property and money were distributed evenly. No one was forced to stay and, in fact, only the most devout believers were encouraged to stay beyond adulthood. Although intermixing of the genders was forbidden, many children came into the community as their parents joined and were well loved, schooled and cared for by the community.

During the early 1800’s they began to attract large numbers of converts and peaked at about 6,000 in number just before the Civil War, but by 1875 their numbers had dwindled to around 2,500. Due largely to changing economic and religious conditions, and their belief in celibacy, the sect died out after the war until, by 1900, a scant 1,000 Shakers populated their villages. There are no remaining Shakers left of the original order, the last sister having died in Canterbury, NH in 1992. The Shakers were a vigorous and industrious people driven by an intense faith in God. Although perhaps best known for their exceptional chairs, they also developed extensive farming communities, an internationally famous seed business and invented hundreds of patentable products for machinery and equipment including the circular saw blade and the basic straw broom. The communities were closely tied together through frequent travel of the elders and a unique commonality of purpose. A devout and deeply spiritual people, it is somewhat ironic that their greatest spiritual legacy lives on in their furniture. Many American and European museums hold collections of Shaker furniture and artifacts.

It is a fitting testimony to the enduring quality and integrity of their furniture that it is still so highly regarded today. Restored as tourist attractions, Shaker villages can still be found in the Northeast and Midwest. Today a small “second order” of Shakers centered in the community of Sabbathday Lake, Maine has formed, primarily as keepers of the faith to manage the villages and support the heritage.

In recent years Shaker furniture has been “rediscovered” in America, Europe and Japan. Original pieces have gone at auction in the mid-six figures and many furniture companies now produce lines of Shaker “inspired” furniture. Shaker Works West was originally formed to become the worlds only complete resource for miniature reproductions of museum quality pieces as well as miniatures and investment grade gallery collectibles.

About the artist and the Art

I feel it is important that anyone who pays for art have some idea of what was intended by the artist in the creation of the piece. I have been involved in the arts since my teenage years. As a professional industrial designer I spent a number of years in product design and over fifteen years in the design and manufacturing of furniture, both contemporary and traditional, including Shaker reproductions. Along the way I earned a Ph.D. in psychology in an effort to better understand the human values that dictate and drive contemporary society and integrate the artistic and cultural aspects of life, and am now retired from teaching design at San Francisco State University. Retired is, of course, a relative term as I work just as hard now as I ever did.

I became acquainted with the Shakers while living in New Hampshire in the 1960’s. I was immediately impressed with the beauty and functionality of their forms But I was even more impressed with the integrity and honesty that was represented in the philosophy of their energies. It took many years for me to realize the importance of what their massage was to the culture. These miniatures are more than just honest and reliable replications of the originals. They represent an emotional return to the traditions of simplicity, purity, honesty and human integrity that invest all that the Shaker did, and which are totally lacking in today’s common interpretation of our culture. Art has always served as an accurate description of the times in which it was created. From our art, music, poetry and theater one easily see’s the chaos that drives our contemporary existence. Its disharmony and complex discordant rhythms are conjecturally in alignment with the stress, moral attitudes and ethics of the day.

These Shaker pieces take us back visually and, hence, emotionally to quieter, human-responsive time. A time when a person’s word was more valuable than his money and certainly more dependable. A time when tradition meant going back more than a decade. A time, when the celibate Shaker Brothers and Sisters sat opposite each other for evenings of intelligent social intercourse, with no agenda other than that of the moment in which they existed. Craftsmanship was a form of worship and exceptional craftsmanship the highest form of worship.

Almost all Shaker originals are now either in museums or private collections and otherwise unavailable to the general public. My work represents extensive research and replicates the actual piece of furniture as it exists today in its present condition. Each piece comes with a complete detailed history, as much as is known, and is available in both 1″ (dollhouse) and 2″ (gallery) scale. The unique antique finishes are the result of years of years on research in the duplication or historical finishes.

About the Shaker Miniatures

Each of the limited edition pieces I produce exemplifies and implores us to recognize the values inherent in traveling with spirit through time (whatever that is) and space producing something of great value with the hands. Each piece is a form of worship for me and each is different, yet the same as is the human race. I hope you, the viewer gain the same sense of peace from them that I do. The other non-Shaker pieces in the line exemplify the same qualities of craftsmanship and attention to detail as the Shaker pieces.

I can think of no more perfect way to touch, explore and empathize with the reality of a culture, or any aspect of a culture, than to become immersed in that culture through miniature recreations of their art. For me, the experience of following the exacting plans and construction details of a master craftsman being guided by his or her spiritual reality, and recreating his/her work is in itself a most remarkable spiritual experience. Each time I make a miniature of a Shaker piece I renew my sense of wonder and appreciation for the beauty inherent in the simplistic. The idea of a miniature allows us to reach backward to our roots in a society that is essentially rootless, temporary and changing at a pace to fast to allow us a place to stop and rest spiritually. The grace, balance and strength of the Shaker miniature offers us a place to rest and contemplate the meaning of life, if only for a moment.

It was inevitable that the artist, designer and builder within would one day meld his interests, talents and experience to produce works of art in keeping with the high ideals of Shaker traditions. After years of making these miniatures for my own collection and interest, I have recently began selling these wonderful works of art to the general public. Each piece is a signed, limited edition and is based on actual museum measured drawings. Each is completely hand made by me only.